Posted by Mary Gallagher Williams at 9:39 PM No comments:

Autumn in the Florida Panhandle

In southern Florida, the beginning of autumn can be measured by the slight drop in temperature. A sure indicator that “snowbirds” from up north will be arriving soon.

But how is the Florida Panhandle unique from the rest of the state as the season begins? A shutterbug’s camera can capture that story better than any words.

It’s the sunbeams filtering through foliage to create a drowsy effect.

It’s the glint of sunlight hitting the water at a more southerly angle.

It’s the seagulls standing still on a once-populated beach, in no hurry to escape due to the absence of human footsteps.

It’s the sand-and-shell sculptures left behind by tiny hands.

And it’s the beginning of the scallop harvest in the bay.


Yet, normal Floridian activities still go on, such as a three-man team competing in the Forgotten Coast Shark Tournament.

For a landlubber such as me, encountering those three participants at Indian Pass Beach made my day.


However, the real highlight was the 80-pound stingray hooked by one of the guys.


I thanked the men for their insight in regard to “sharking” and wished them much success as first-time competitors.

I’m excited to see what surprise the Lord has in store for my next photography adventure.

“So God created the great creatures of the sea and every living thing with which the water teems and that moves about in it, according to their kinds, and every winged bird according to its kind.” – Genesis 1:21(NIV)

Posted by Mary Gallagher Williams at 3:00 PM No comments:

What an honor to volunteer this morning at the "Miles for Mills" 5K benefitting the Travis Mills Foundation. A humble yet funny guy, Staff Sgt. Travis Mills is making an impact in his home state of Maine.

In June, his foundation will relocate to the former Elizabeth Arden estate in Mount Vernon, Maine. The estate has been renovated as a fully accessible retreat for disabled and wounded veterans and their families.

And who better to know what these veterans go through than Travis (pictured above). In April 2012, he lost all four of his limbs to an IED blast while on patrol in Afghanistan.

Travis, thank you for using your story to make a difference in the lives of our wounded warriors!

Posted by Mary Gallagher Williams at 10:32 PM No comments:

After this past week’s bout with snowstorm Stella, I understand why true-blue Mainers venture outside at every given opportunity. Stella just couldn’t keep these New Englanders down.

Yesterday’s sunny blue skies prompted me to grab my Canon camera and drive south to one of my favorite Maine spots. Cape Elizabeth and Higgins Beach.


For my friends in Texas and other parts of the Deep South, some of these photos prove that snow and sandy beaches do actually coexist.

Next, I headed to the Western Promenade in Portland as the setting sun splashed rich colors across the city.

Please take a few moments to enjoy these snowy scenes. After all, the white stuff will be gone before you know it, with spring flowers in full bloom.

As always, here’s a portal to end this blog post. The fish cutout in the center of the screen door adds a unique touch, don't ya think?

Until next time….
Posted by Mary Gallagher Williams at 11:53 PM No comments: 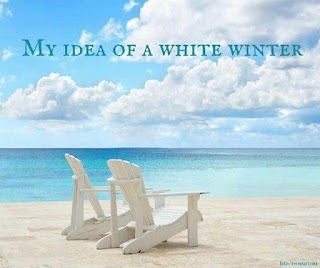 and then my reality.


Orson is the second major winter storm to pound the state of Maine in the last four days.

With that said, this is my fourth winter here, and my southern blood still hasn't assimilated to the extreme cold of the Northeast.

I've become a pro at hunkering down, but will I ever adjust? Only time will tell.

"He makes the snow fall until the ground is as white as wool. He makes sleet blow through the air like dust." - Psalm 147:16 (ERV)
Posted by Mary Gallagher Williams at 3:44 PM No comments:

My Recent Privilege in the Courtroom 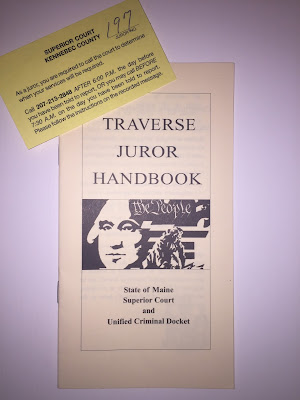 Recently, I was chosen as a juror not only for a criminal trial, but for a civil trial as well.

With all the negativity surrounding our recent presidential election, these trials have been a welcoming distraction as my focus settled on another branch of government—our judicial system.

The criminal trial concluded last week with a not-guilty verdict for two of the three counts that the defendant was charged with. The third count resulted in a hung jury.

In the civil trial, which ended last night, we awarded monetary damages to the plaintiff.

At the beginning of that civil trial, the presiding judge pointed out that a juror is actually a judge. The Bible records this same mindset when Moses took his father-in-law's advice and appointed able-bodied people as judges. (Exodus 18) I had never considered such a notion of a layperson acting as judge in a court of law.

Serving on a jury is an honorable duty even though many Americans balk at the idea. So, if you ever get called upon for jury selection, please ignore the naysayers. Pessimists who have been summoned usually gripe because the process can be a tedious and long one. My selection for both trials lasted two days, yet I wouldn’t change a thing.

These trials were not the first time I've been called to serve. Over three decades ago, I served on a jury for a murder trial in Texas. And about 15 years ago, I was summoned for service but let go because I knew the District Attorney on a social level.

Only in the land of the free can justice be determined by ordinary, everyday folks like you and me. Consider jury duty an honor. Consider it an American privilege. And consider it a God-given responsibility.

“When people have a dispute, they are to take it to court and the judges will decide the case, acquitting the innocent and condemning the guilty” - Deuteronomy 25:1 (NIV)

Posted by Mary Gallagher Williams at 7:15 AM No comments:

This breathtaking view is located at the most northwestern point on the continental United States—the Olympic Peninsula. The pounding waves and beauty of this place took my breath away. Take a listen, won’t you.

Posted by Mary Gallagher Williams at 1:17 AM No comments: